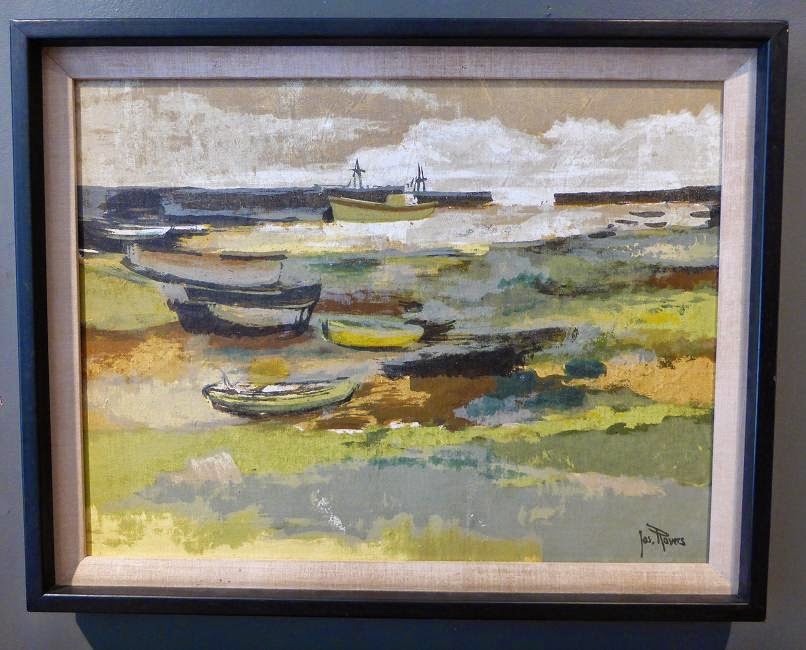 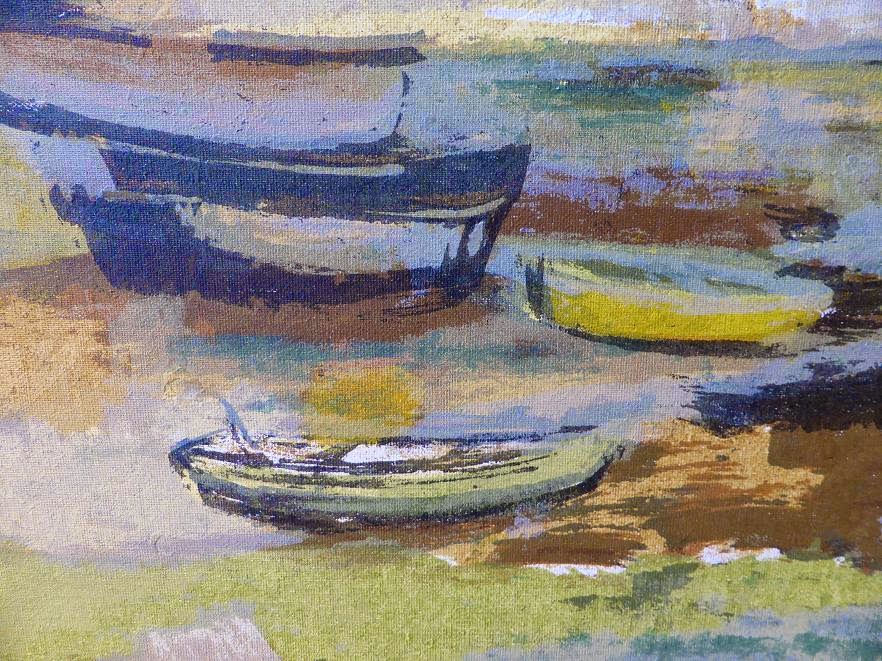 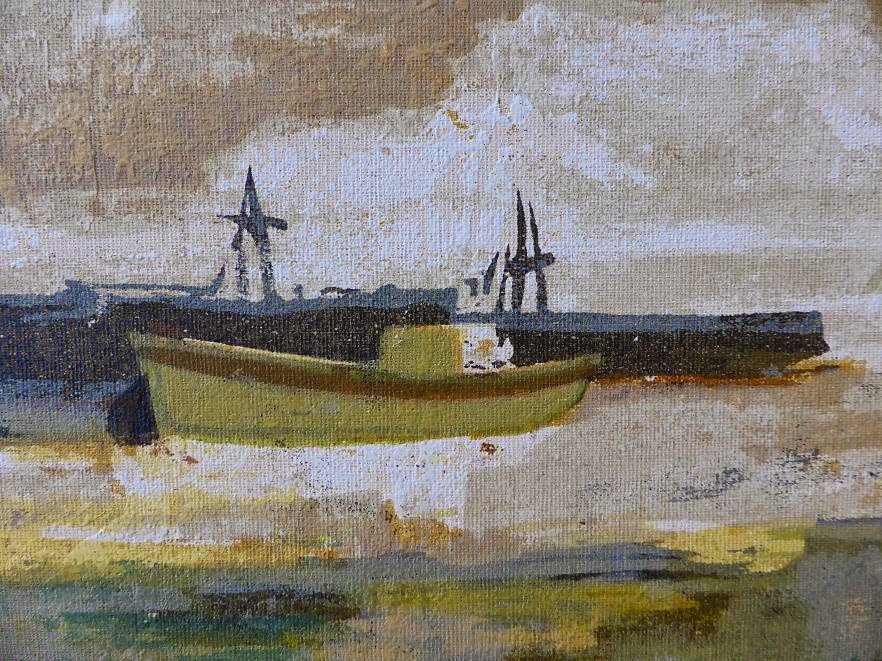 Joseph Johannes Rovers (1893-1976) was a Dutch artist who studied at the Royal Academy of Fine Arts in Antwerp and Brussels. He lectured and taught at the Rijks Academy in Amsterdam for fifteen years.  This impressionistic marine painting features several loosely painted small boats in the foreground and two larger ships out at sea.  The color palette is wonderful with muted browns grays and steely blues enlivened with shots of chartreuse and ochre.  Framed.,  28" l., 22" h.  Dutch, c. 1960's  SOLD 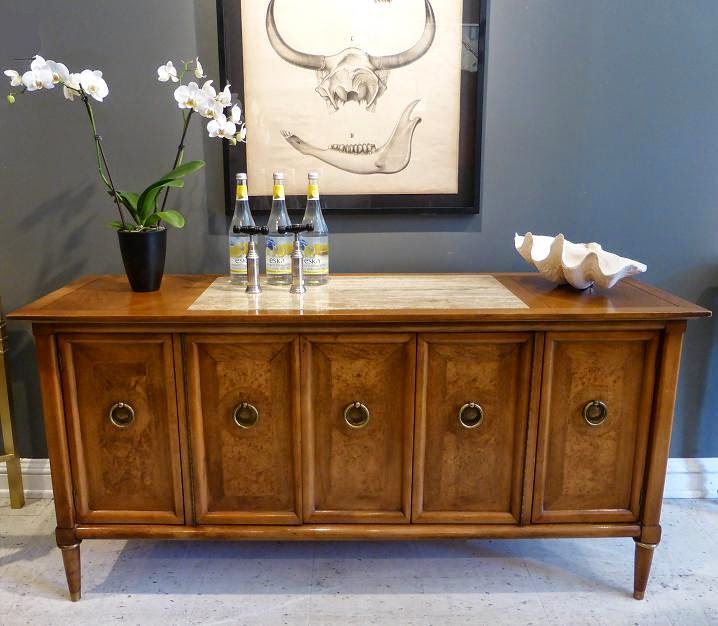 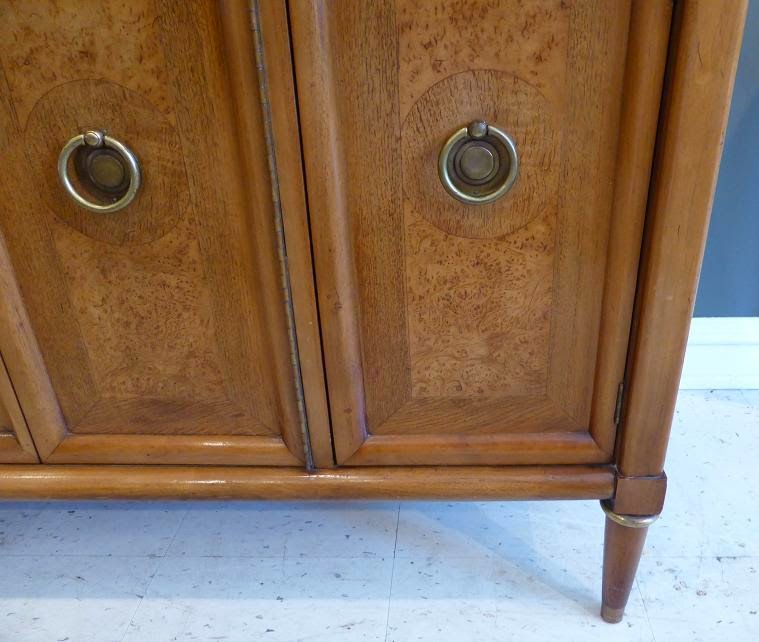 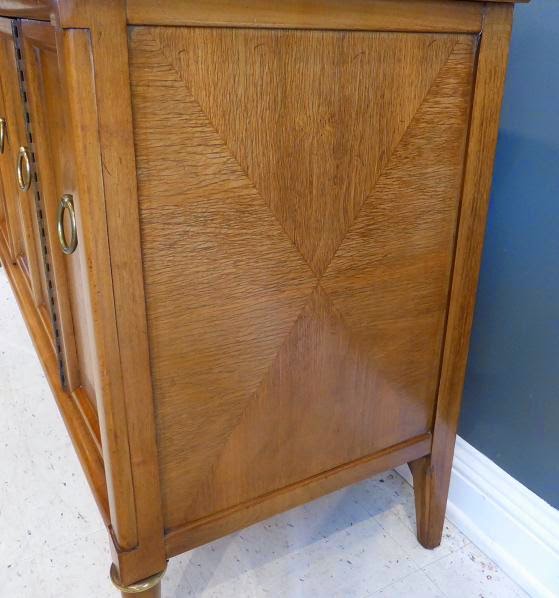 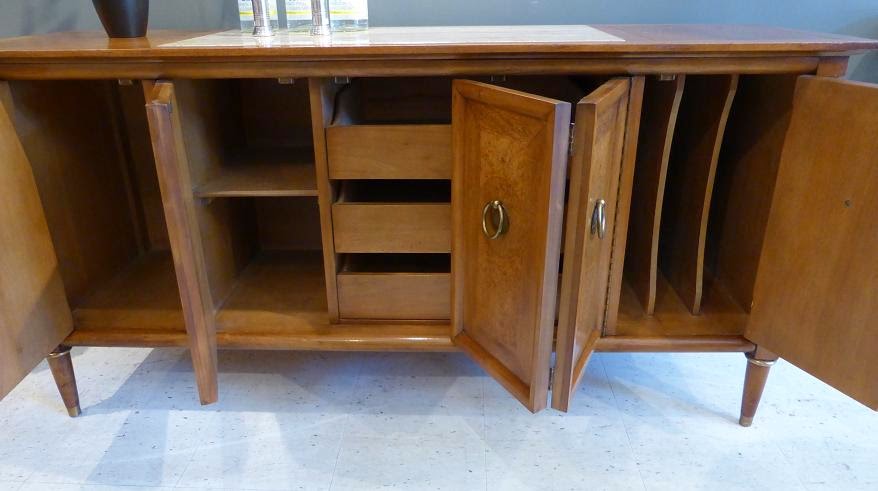 Elegant and finely crafted credenza by Henredon.  This piece has wonderful details such as an inset marble top, inlay decoration on the top, sides and doors, brass ring pulls and brass accents on the legs and feet.  There is a great deal and great variety of storage inside.  This piece would make a stunning addition to a dining room, living room or den and would function perfectly as a sideboard, bar or entertainment unit.  64" l., 20" w., 31 1/2" h.  American, c. 1950's  SOLD 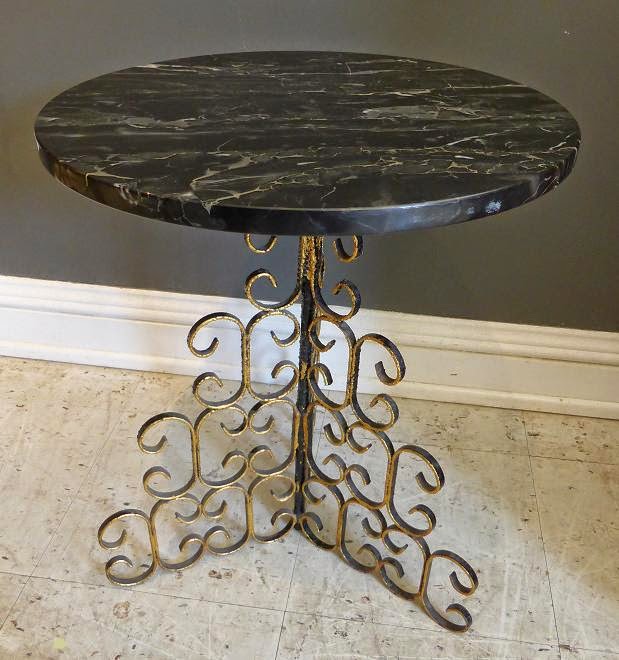 Unique and very decorative side table with a marble top and a scrollwork lacquered metal base with gilt decoration.  18" diam., 21" h.  Italian, c. 1960  SOLD 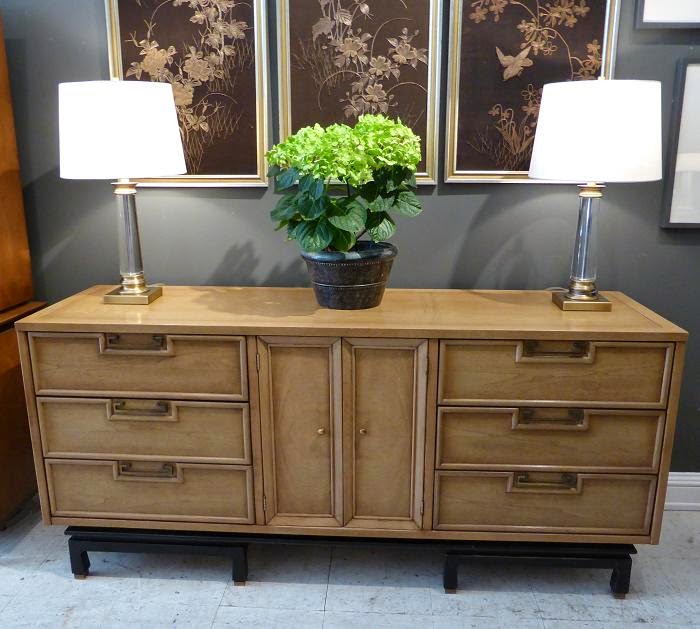 Sleek and sophisticated bleached walnut credenza by American of Martinsville.  The Asian influenced credenza or chest has center doors which open to three drawers.  Flanking the center are three ample drawers on each side.  The drawers sit on an ebonized and recessed platform base with brass capped legs.  70" l., 20" w., 32 1/2 h.  American, c. 1960's  SOLD 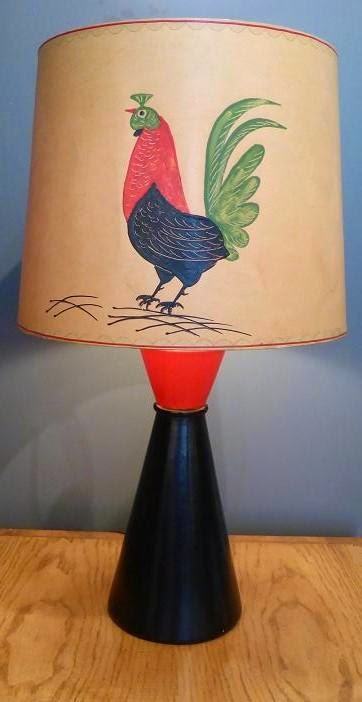 Protect your home.  The rooster is steeped in symbolic meanings that deal with watchful vigilance against evil.  The rooster has many other symbolic meanings including honesty, courage and strength.  This particular rooster lamp is also just really attractive and very charming.  The shade is hand painted parchment and the base is painted ceramic.  32" h., 17" diam. American, c. 1940's  SOLD 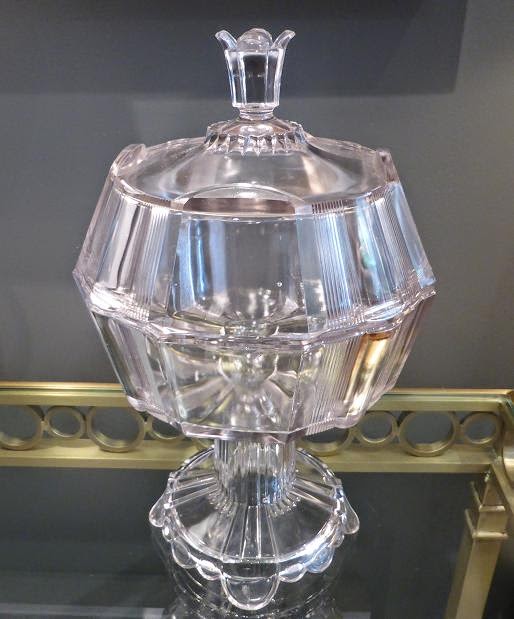 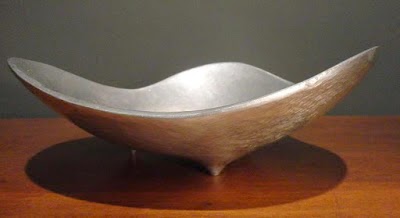 Bruce Fox was an artist and sculptor who founded his own design company in 1938 after returning to the U.S. from Central America.  He was very influenced by the art and crafts and the methods of metal working he saw while in Central America and particularly Panama.  This biomorphic, hand finished aluminum bowl is signed and dated 1955.  11" diam., 4 1/2" h.  American, c. 1955  SOLD 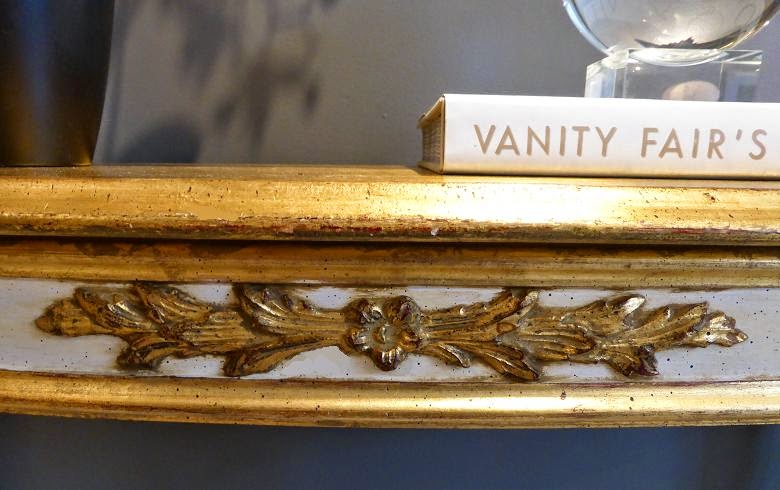 Impressive and elegant console and mirror by La Barge.  The very ornate gilded wood mirror has Chinese Chippendale influences.  The console has a gilded top and decoration and a paint decorated base.  Italian, c. 1960's.  SOLD 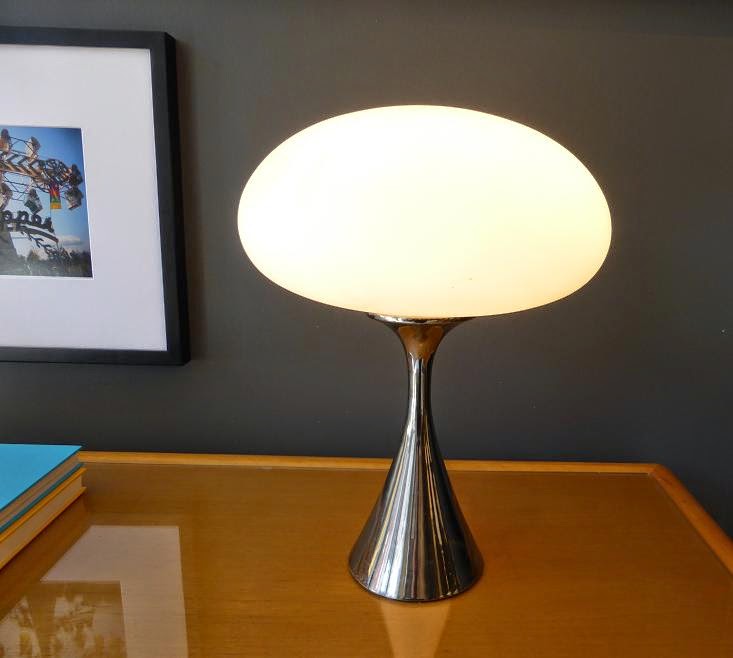 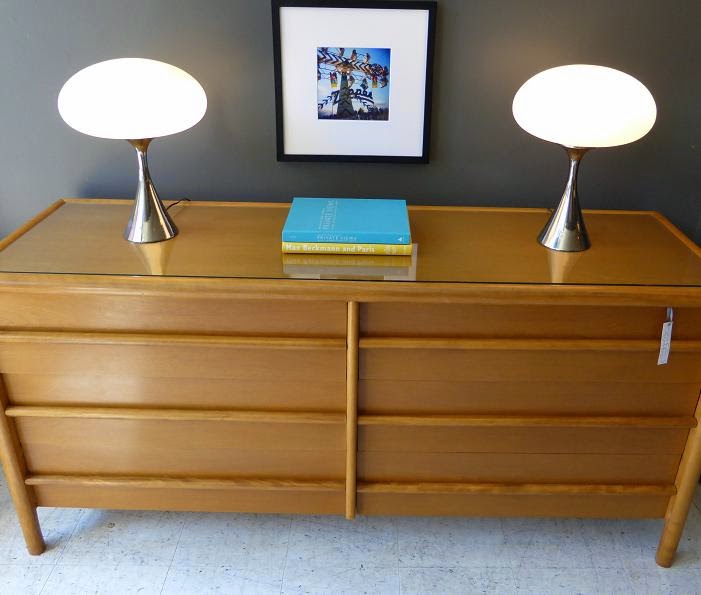 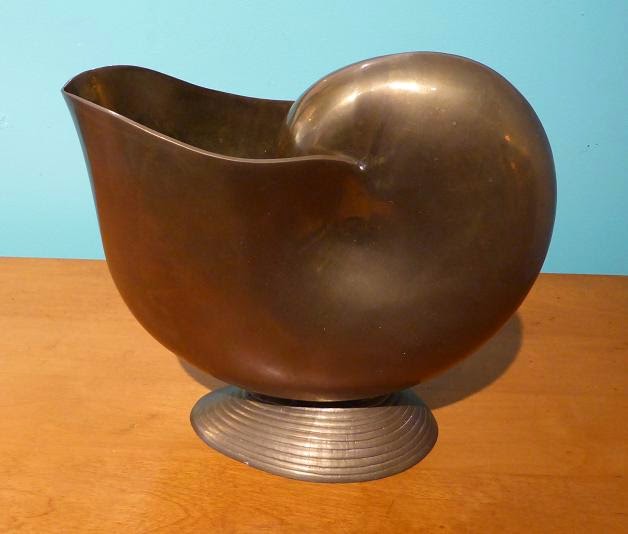 If you're sensing a theme today, it does seem to be looking like we are ready for the beach!  This giant Nautilus shell vase is made of brass and is nicely patinated.  It is quite sculptural and feels very modern.  9" h., 11" l., 5" w.  American, c. 1960's  SOLD 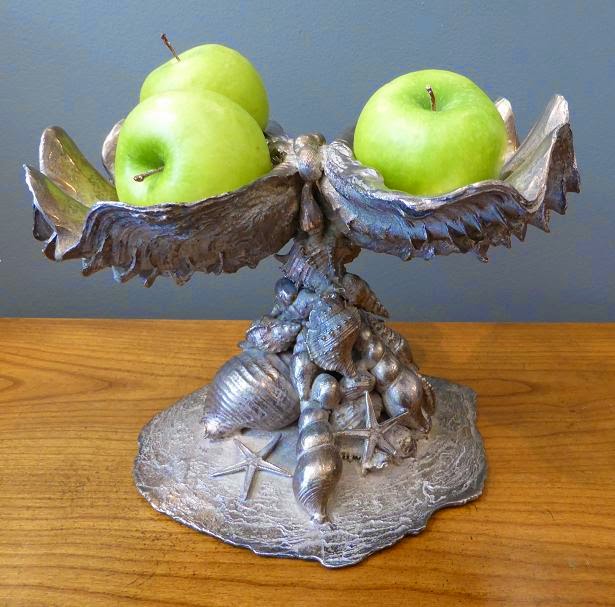 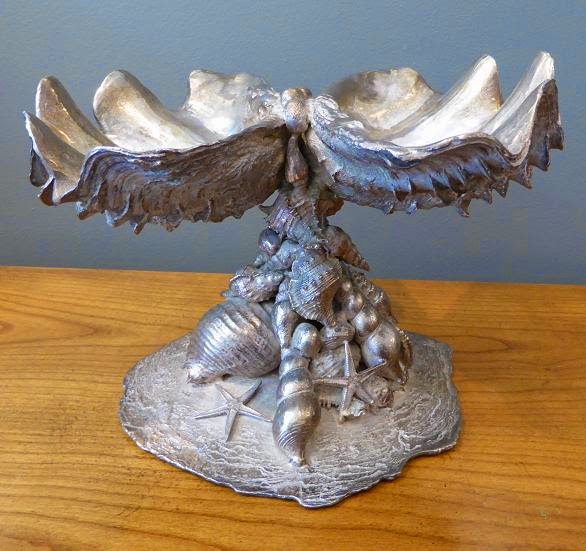 Sensational silver shell compote by Maitland Smith.  This piece, while produced in the late twentieth century, has its roots in much earlier and more elegant times and with silver holloware makers such as Tiffany and Gorham.  11" h., 9" diam.  American, c. 1970's  SOLD

The Curtis Jere design house was founded in California in 1963 and produced sculptural works ranging from the representational to the highly abstract.  Works produced by the company, particularly those of the 1960's and 70's, have become highly praised and sought after today.  Writer Mitchell Owens wrote a two page article on the history of C. Jere for the November 2010 issue of Elle Decor.  In it he remarks that "Today those pieces are attracting the admiration of leading dealers in vintage chic".  He goes on to note that after launching in 1963, Jere sculptures were distributed by Raymor, a cutting edge studio in New York City, and retailed at Gump's in San Francisco and other high end retailers in several major cities across the U.S.  This large and very decorative sculpture by C. Jere features a dock with seagulls in the foreground with three sailboats behind.  It is signed and dated.  50" l., 22" h., 4 1/2" d.  American, c. 1972  SOLD 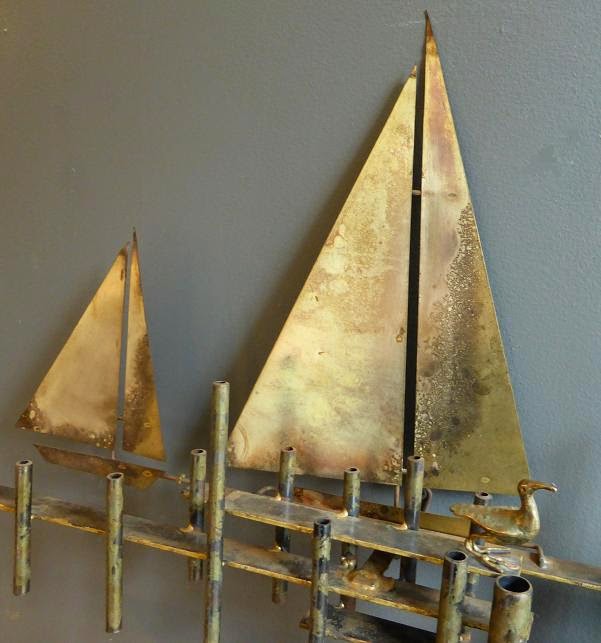 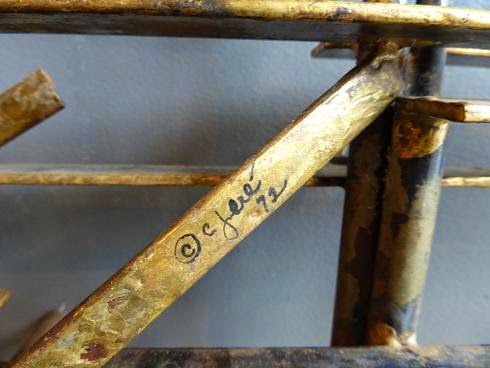 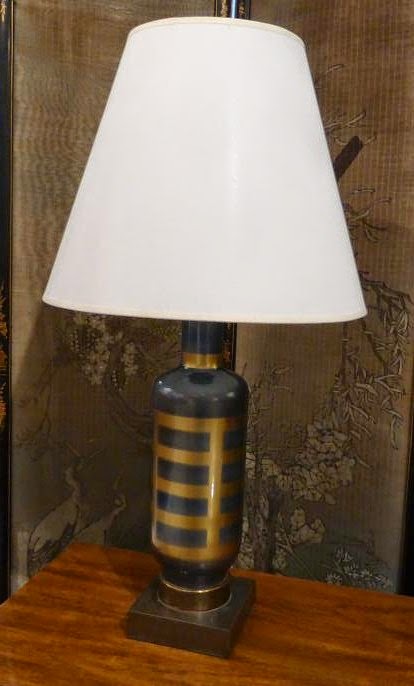 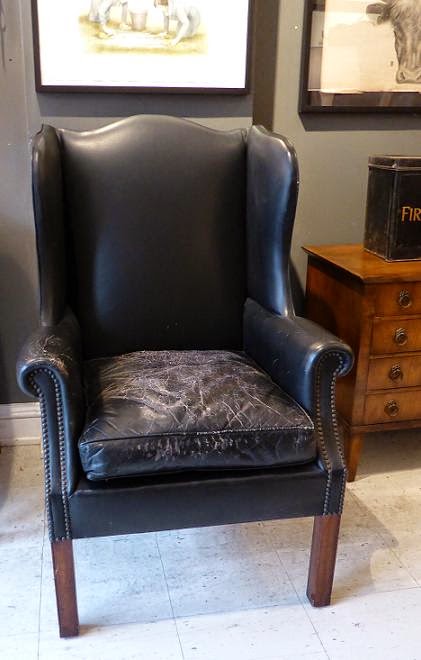 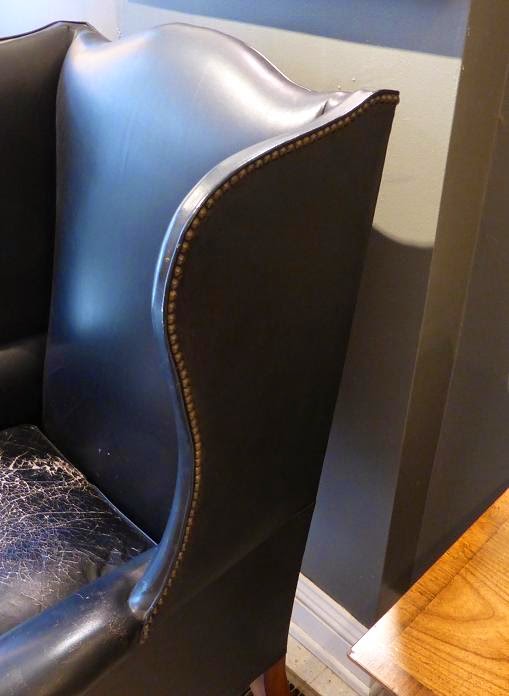 This could easily become your favorite chair.  It has great character and has developed a wonderful patina over the past few decades.  It is also really comfortable and has a reversible down filled seat cushion.  One side is leather and the other corduroy.  43" h., 28" w., 28" l.  American, c. 1960  SOLD 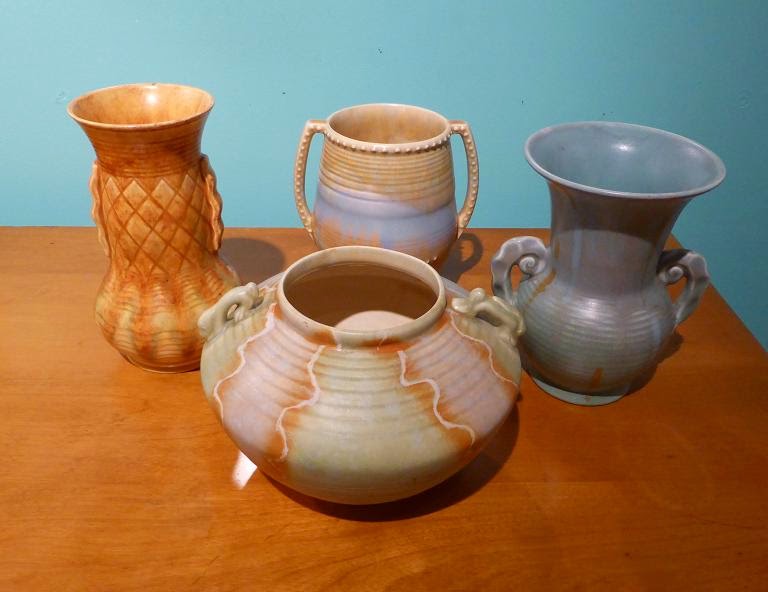 The Beswick Pottery Company began in Longton, England in 1896 and produced pieces with some of the most interesting designs and glazes to come out of that country.  During the 1920's and 1930's, and well into the 1960's, they employed many of the best pottery designers in England.  These Art Deco vases were produced by Beswick during the 1930s and have beautiful pastel colored glazes and great Art Deco shapes.  English, c. 1930s  SOLD 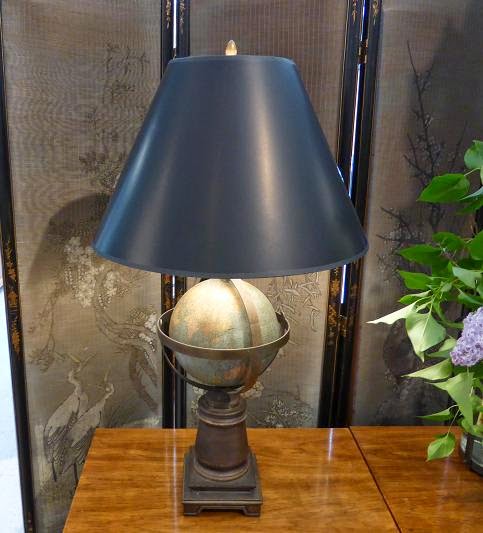 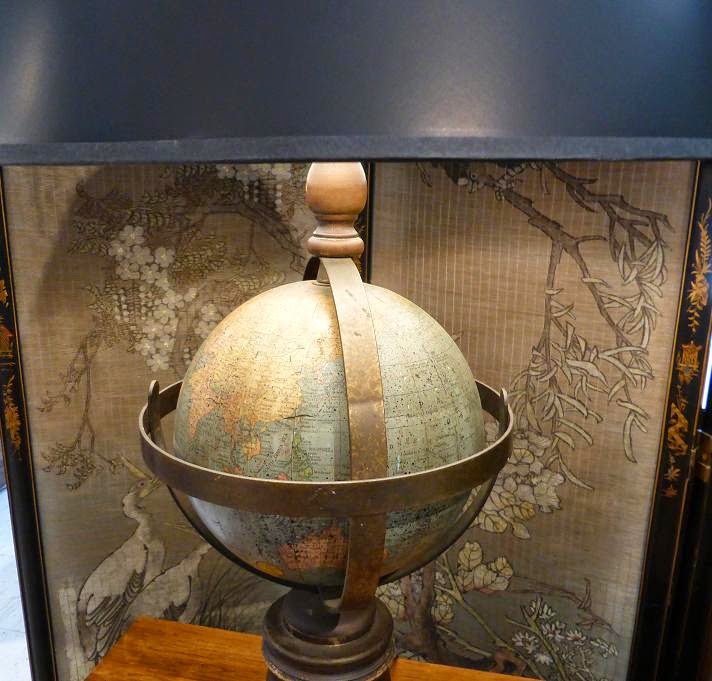 The perfect library or den lamp, this handsome table lamp has a wooden base, rotating globe on a metal frame and a new black parchment shade.  35" h., 20" diam.  American, c. 1960's  SOLD 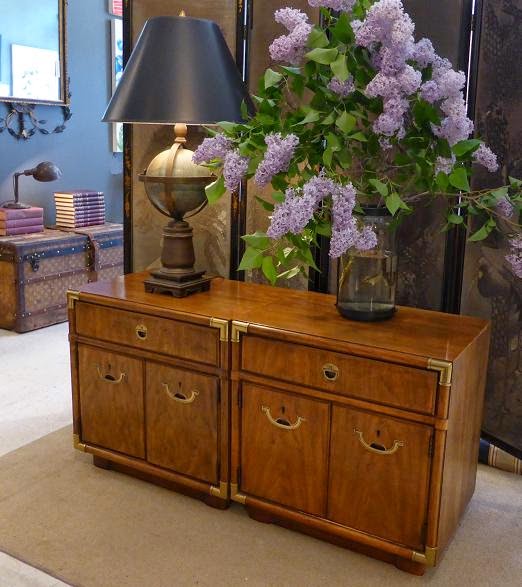 Classic pair of walnut campaign style chests by Drexel with brass pulls and corners.  Each chest has a single drawer with two doors below which open to a storage compartment.  They are very versatile and would work nicely flanking a bed, or in a living room or den.  Each chest is 24" l., 16" w., 24" h.  American, c. 1970  SOLD