Head of the Virgin 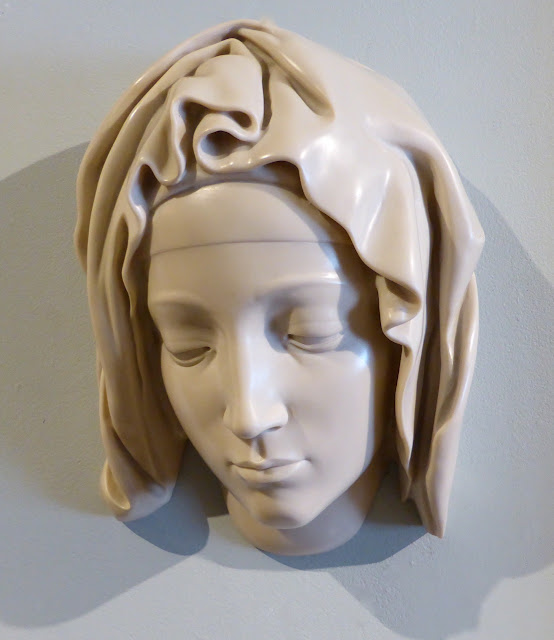 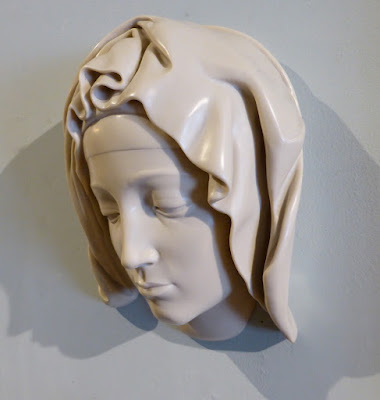 'Like A Virgin'.  Actually it is The Virgin, or at least her head, and it is a detail from the Pieta by Michelangelo.  This facsimile copy was authorized by the Vatican Museums.  It was produced under the supervision of the Metropolitan Museum of Art from direct impression molds of the original sculpture.  It is made of cold cast marble, a refined marble bonded with polymer resin.  The marble is from the quarries at Carrara, Italy, the source of the single block from which Michelangelo carved the Pieta.  Great Easter gift!  13" h., 9" w., 6" d.  c. 20th c.  $195.00  SOLD
Condition:  Very good vintage condition with age appropriate wear. 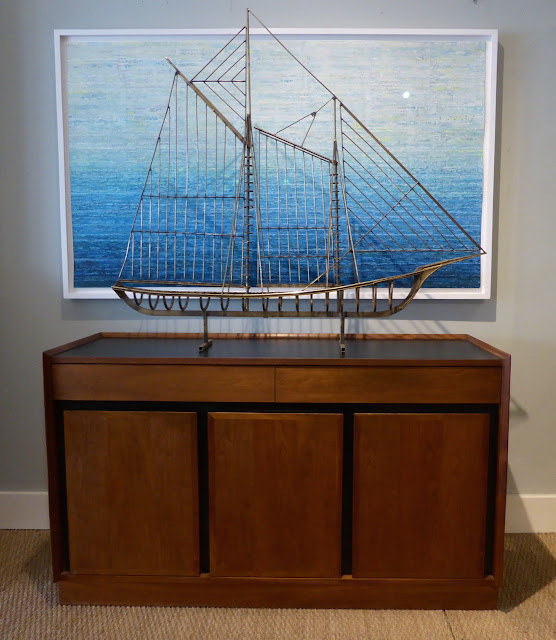 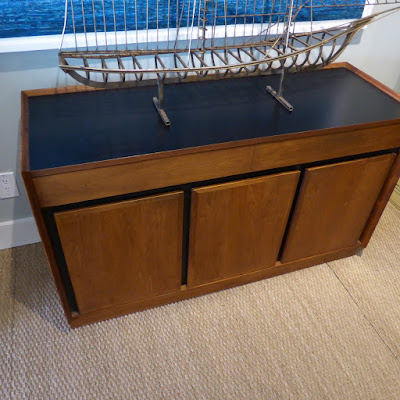 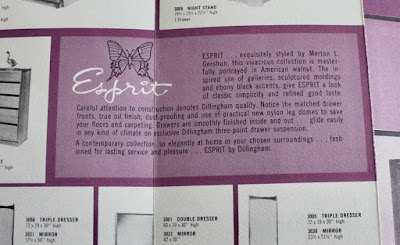 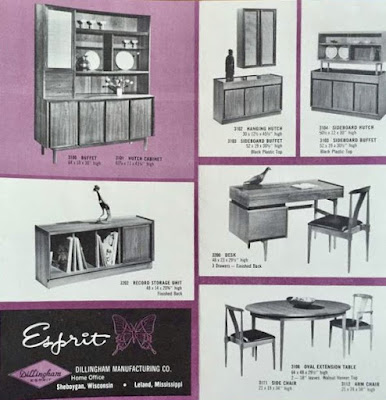 The 'Esprit' Collection by Dillingham was designed by Merton Gershun.  This cabinet from the collection is great looking and super functional with a 'look of classic simplicity and refined good taste.  The cabinet has two long drawers.  Below, the door on the left opens to a compartment with one drawer.  The two doors to the right open to a large compartment with a single stationary shelf. The front has ebony (laminate) accents.  The top also has an easy care laminate layer.  'A contemporary collection so elegantly at home in your chosen surroundings....fashioned for lasting service and pleasure....Esprit by Dillingham.'  Who could ask for anything more?  52" l., 19" d., 31" h.  American, c. 1960's  SOLD
Condition:  Good vintage condition with age appropriate wear and a few minor darker spots to one door and minor color variation (priced accordingly) 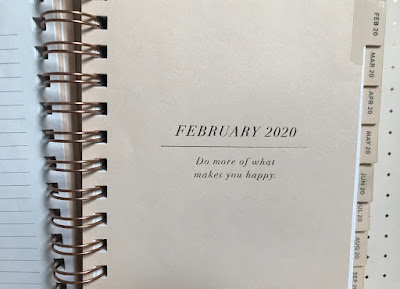 This week, the shop will be open by appointment Thursday-Saturday.  To make an appointment, please phone or text us at 416.407.1269.  Thank you! 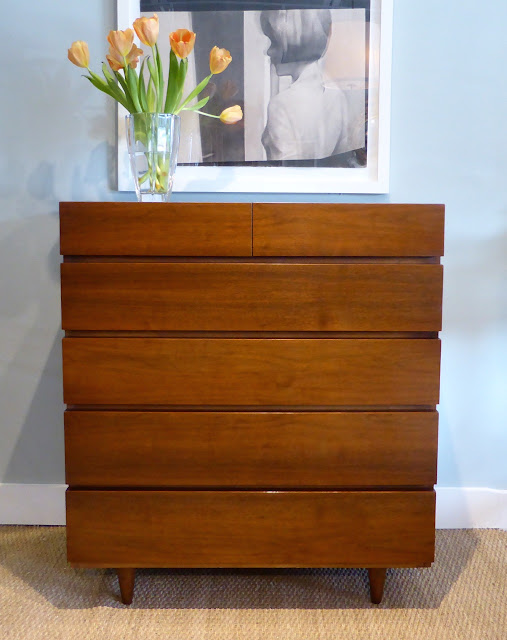 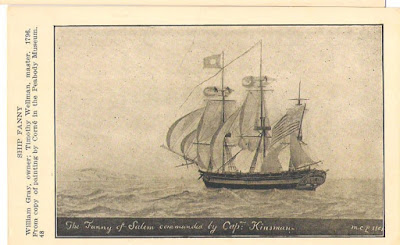 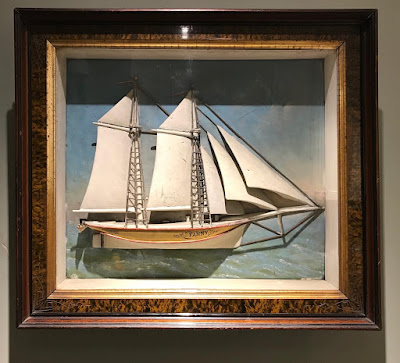 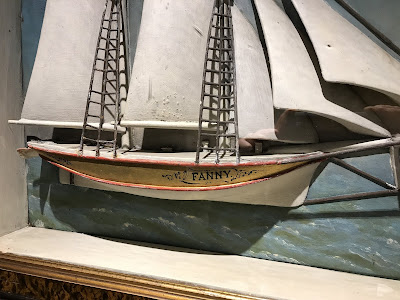 Winner:  Best ship in a lead role in a diorama.....’The Fanny’.  This is the most beautiful ship diorama we have seen. The hand carved ship was hand painted, as was the background.  The Victorian diorama is in its original faux tortoise frame with the original glass.  With Valentines four days away, this is the ultimate expression of love for the sailor in your life or a girl named Fanny. 25” w., 22” h., 5” d. American, c. mid-19th c.  SOLD
Condition:  Very good vintage condition with age appropriate wear. 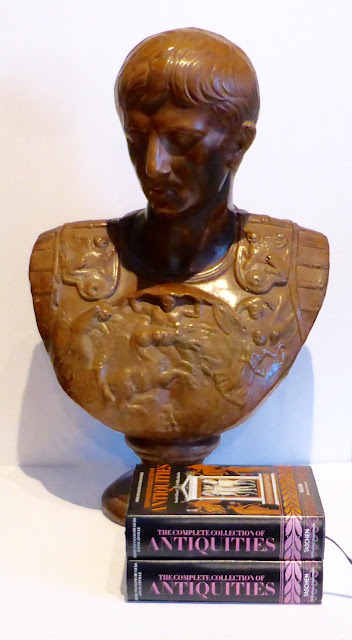 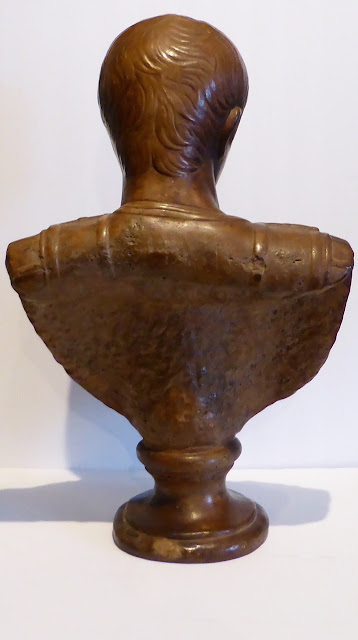 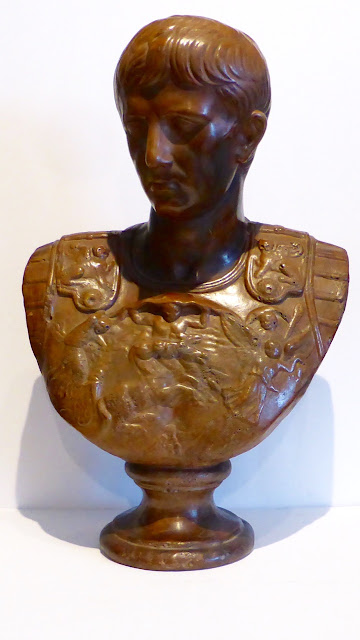 "Very little is needed to make a happy life;  it is all within yourself, in your way of thinking."
-Marcus Aurelius
This has always been a favorite quote.  It's one of many by the Roman emperor and philosopher Marcus Aurelius.  This large and very handsome bust of a young Marcus Aurelius looks so much like stone, it's hard to believe it's ceramic.  I'm still not 100%.  Great addition to your Classics collection.  24" h., 15" w., 10" d.  American, 20th c.  SOLD
Condition:  Very good vintage condition with age appropriate wear. 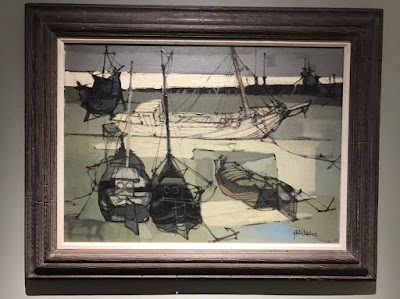 This is one of the most fascinating pieces I have found during my time in this business.  I fell in love with this painting and won't be able to let it go, but I have to tell the story of what I discovered while researching it.  It involves a number of fine artists, several name changes, many marriages, a few affairs, a famous rock promoter and a murder.  Initially, I found very little information on the artist, but as I dug deeper into old newspaper articles, things became clearer.  I'm also sharing this information in the hope it will help others when researching the artists involved online.

My first clues about this wonderful 1950's oil on canvas came from the back of the painting.  There is a label from The Galleries of The Roosevelt Field Art Center in Long Island which identifies the artist as 'Fabert Himbert'.  The canvas has a handwritten N.Y.C. address of 30 E. 14 St. and the name Himbert. 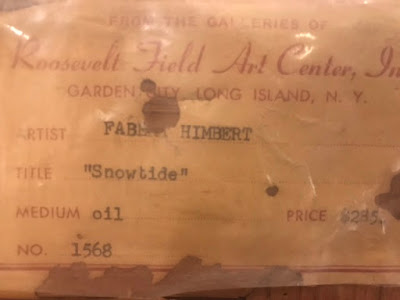 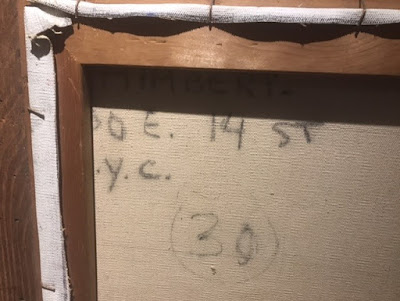 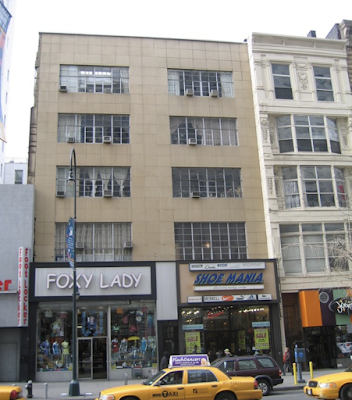 The signature on the front of the painting looks like 'Limbert' and there are quite a few pieces listed online incorrectly identifying 'H'imbert as 'L'imbert. 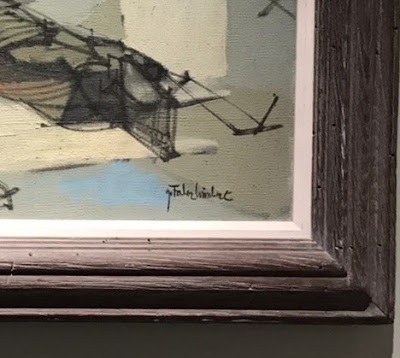 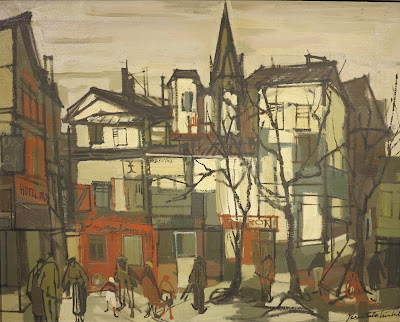 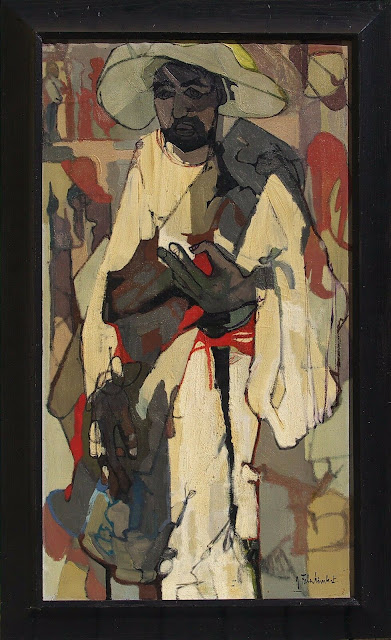 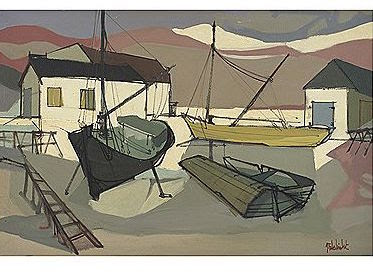 In researching works, I found a number of pieces that looked similar stylistically to the Jean Faber Himbert paintings that were signed Jacques Fabert.  The signatures looked similar too. 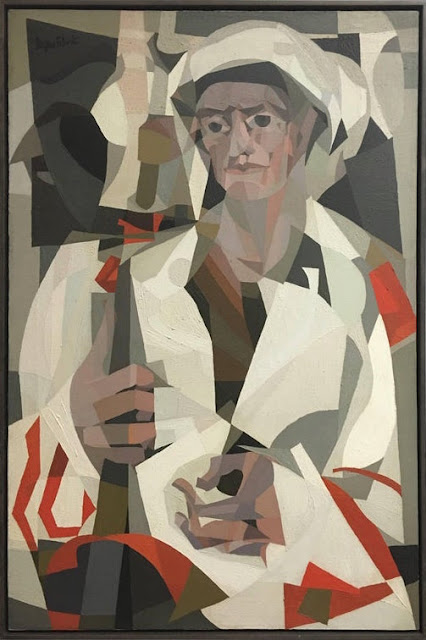 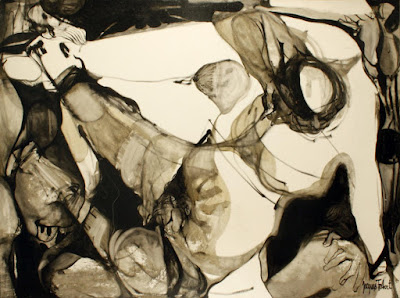 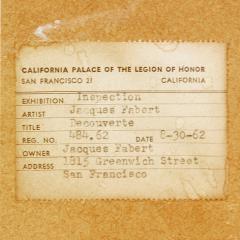 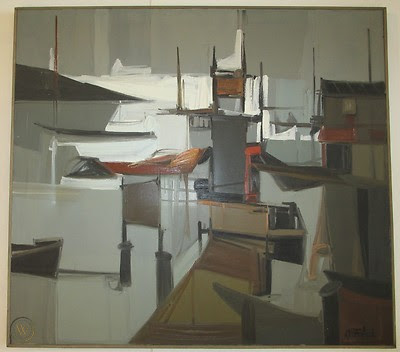 An article in 'The El Paso Times' from 1957 was very helpful in answering some big questions.  A photograph shows "Mr. and Mrs. Jaques Hibert, known to the art world as Jean Faber Himbert and Jean Hyson".  The article gives some good background information on the couple, both of whom were artists.  They were in Texas to paint before going on to Mexico and then South America.  At the time, he was 32 and represented by the Little Studio in N.Y.C. as well as Galerie Drouant-David in Paris.  The article mentions that he had already shown in N.Y.C., Washington, Chicago, Beverly Hills and Boston, and his patrons included Pamela Woolworth, Vincent Price, Clifton Fadiman and Hal March.  Himbert was born in Paris and studied at the Beaux Arts for four years.  Hyson was born in the U.S.  She was working in a New York gallery that handled Himbert's work, and met him on a trip to Europe after having seen his paintings in the states.  The article closes stating "The artistic pair hope to settle down eventually in a part of the U.S. appearing as nearly like the Riviera as possible.  Himbert also plans to become a U.S. citizen." 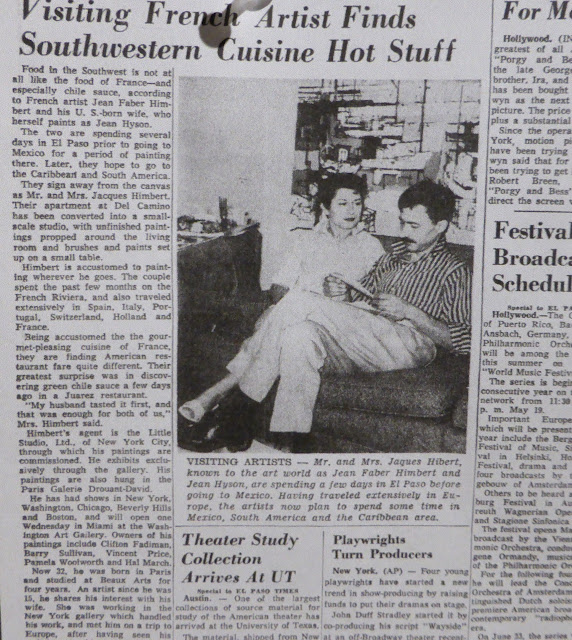 The 1957 El Paso article is the only piece I could find in which he is referred to as Jean Faber Himbert.  After that, he becomes Jacques Fabert.  A November 1961 article from 'The San Francisco Examiner' refers to him as "Jacques Fabert, a San Franciscan who has studied with Leger and Andre Lhote".   There are occassional mentions of shows by Fabert and Hyson during the sixties.  Fabert and Hyson divorced sometime prior to April of 1974.  A notice in 'The San Francisco Examiner' announces Hyson's fourth marriage to photographer Tony Fabert.  "Which is interesting because her last husband was Jacques Fabert.  Tony's daddy."  She married her stepson. Tony was Jacque's son from his first wife in France.

Meanwhile....at some point prior to 1972 Jacques Fabert developed a relationship with Bonnie Maclean in San Francisco.  Bonnie Maclean is an artist and the former wife of rock concert promoter Bill Graham.  She is perhaps best known for her late 1960's poster art advertising Graham's concerts.  MacLean and Graham married in 1967 but had a difficult marriage.  After finding out about several affairs, MacLean left Graham and later moved to Bucks County with her son David and Jacques Fabert in 1972. 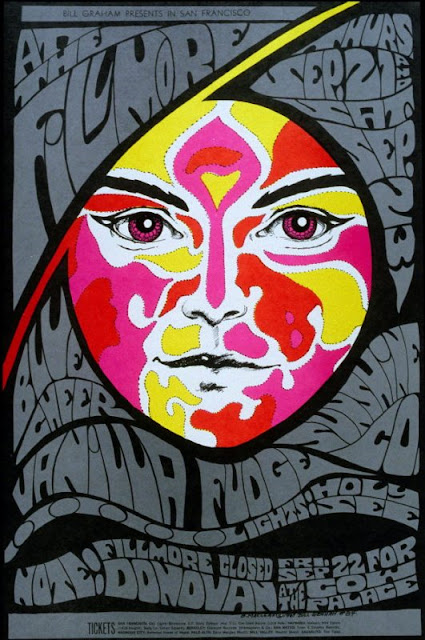 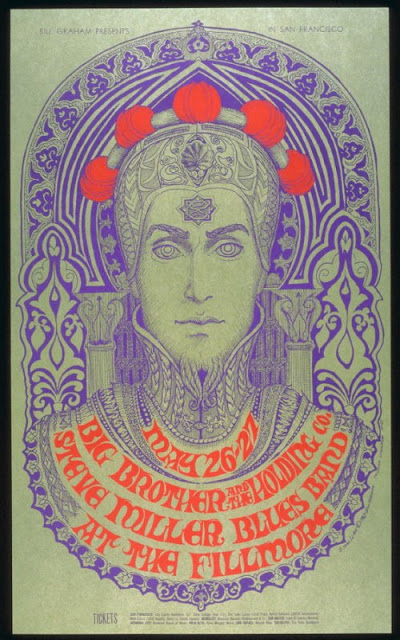 Fast forward a bit to August of 1978.  Jacques Fabert's ex-wife, Jean Hyson, and his son Tony have been married for about four years and are living in a home in San Francisco.  On August 13, 1978, she fatally shot Tony.


"On the day before the homicide, August 12, defendant and her husband saw her psychiatrist, Dr. Harris. Defendant had seen Dr. Harris on at least three other occasions. Defendant became panicky because of the many hours her husband spent away from home. At the August 12 session with Dr. Harris, defendant's husband denied that he was seeing another woman.
When defendant arrived home on the evening of August 12, her husband was not home. However, he left a note stating he would return in a few hours. When he had not returned by midnight, defendant unsuccessfully tried to locate him by telephoning the police and several of his work colleagues. He finally returned about 8:45 a. m. and they talked. He told defendant that he was seeing another woman, someone “he had met on the street.” Defendant felt as if she had been hit on the head; everything went white. The next thing she remembered was coming up the stairs with the police. 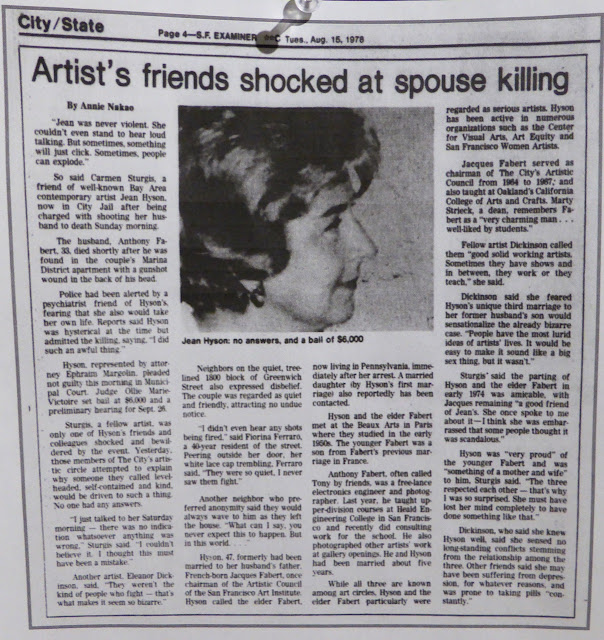 She was found guilty of voluntary manslaughter.  The judgement was later reversed on appeal that her constitutional right against self incrimination was violated.  She is in her late eighties and still lives in San Francisco.


Jacques Fabert and Bonnie MacLean married in 1981.  He died in October of 2013 in Bucks County where he had lived with Bonnie since 1972.