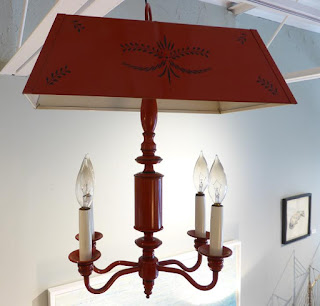 Gerry Zanck for Gregori, Side Tables 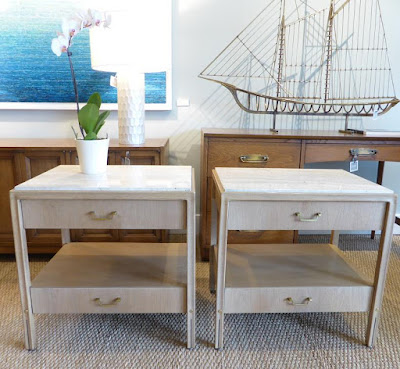 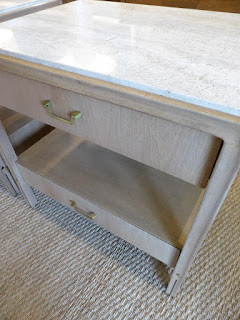 Sophisticated and finely crafted pair of side tables designed by Gerry Zanck for Gregori.  Each two-tiered table has an inset Travertine marble top, a top and bottom drawer with elegant polished brass pulls, and brass decoration on each leg.  The tables are finished on all sides.  24" l., 18" w., 24" h.  American, c. 1950's  SOLD

Milo Baughman for Glenn of California, Side Tables 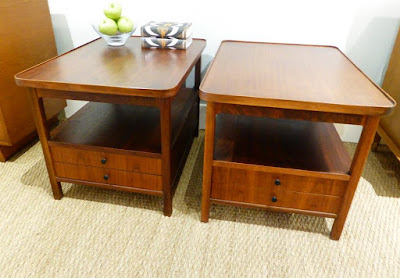 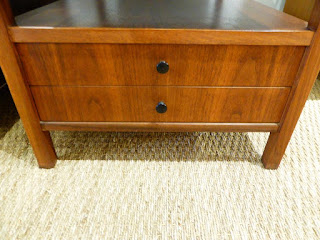 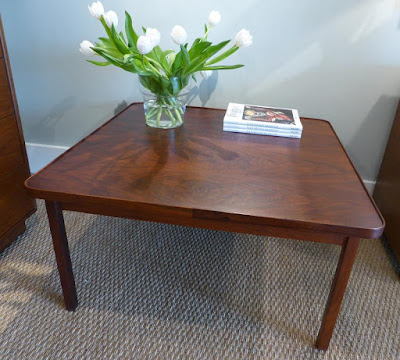 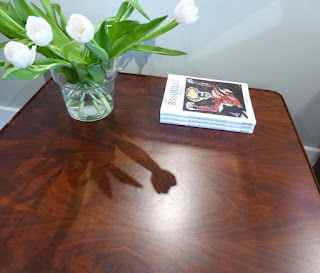 Smart and sleek little pair of mid-century stands with brass hardware and decoration, and glass tops.  Each stand has a single drawer and two doors which open to a storage compartment.  22.5" l., 13" w., 20" h.  c. 2nd half 20th c.  SOLD 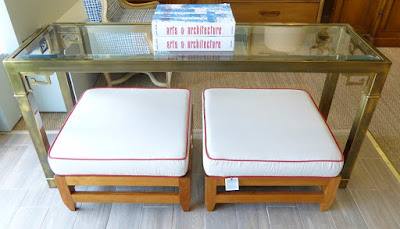 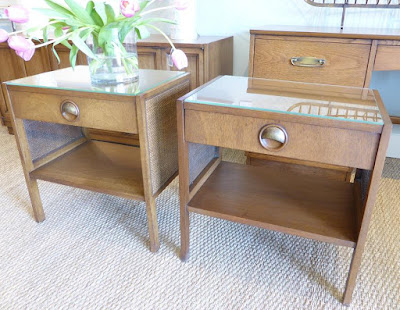 Cool, casual and unique pair of custom walnut tables with caned sides and inset glass tops.  Each table has a single drawer with patinated brass hardware and a shelf below for storage or display.  The label inside one of the drawers reads Jordan A. Truthan.  Jordan Truthan was a celebrated interior decorator who worked internationally.  22" l., 15" w., 23" h.  American, c. 1960's  SOLD 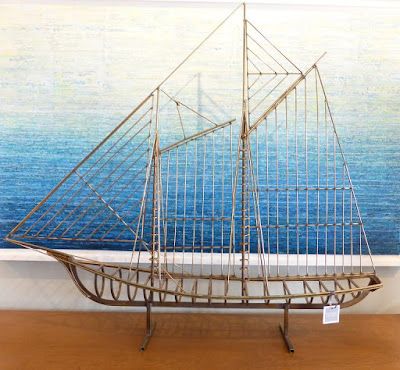 Large and impressive brass sculpture of a sailing ship by Curtis Jere.  The Curtis Jere design house was founded in California in 1963 and produced sculptural works ranging from the representational to the highly abstract.  Works produced by the company, particularly those of the 1960's and 70's, have become highly praised and sought after today by collectors.  Writer Mitchell Owens wrote a two page article on the history of C. Jere for the November 2010 issue of Elle Decor.  In it he remarks that "Today those pieces are attracting the admiration of leading dealers in vintage chic".  He goes on to note that after launching in 1963 Jere sculptures were distributed by Raymor, a cutting edge studio in New York City, and retailed at Gump's in San Francisco and other high end retailers in several major cities across the U.S.  This ship sculpture is signed and dated 1976.   It would make a great modern nautical addition to a home, cottage, beach or boathouse.  46" l., 8" w., 41 1/2" h.  American, c. 1976  SOLD 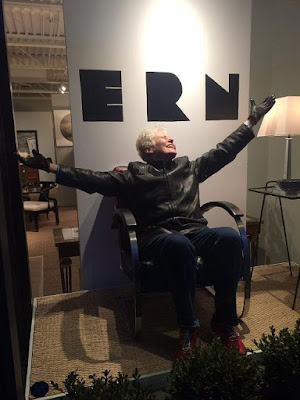 Last night while we were getting the shop ready for the big sale today, a couple of our favorite customers stopped in to say hello.  One of them ended up in the front window test driving a Wolfgang Hoffmann chair.  Do you think she liked it??  Have a great weekend! 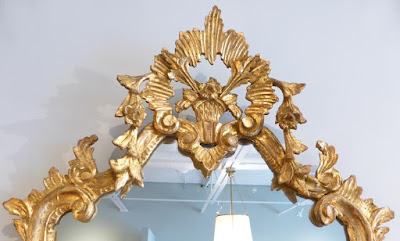 Stunning hand-carved and gilded mirror with a flower basket form crest and cascading foliate and acanthus leaf motifs.  The acanthus leaf motif continues through the rest of the mirror frame and at each corner of the base.  41" l., 24" w.  Italian, c. 1950's  SOLD 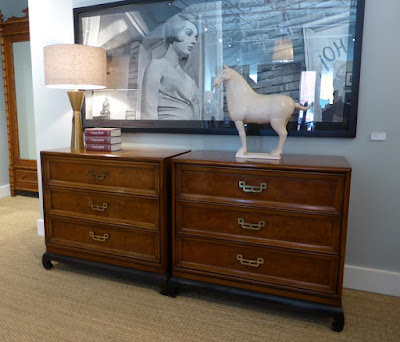 Handsome pair of Asian Modern chests by Henry Link.  Each chest has three drawers with burl fronts and brass pulls, and an ebonized base.  They would be a casually sophisticated addition to a bedroom, but would also work nicely in a living room, library or den.  Each chest is 36" l., 18.5" w., 33" h.  American, c. 2nd half 20th c. SOLD 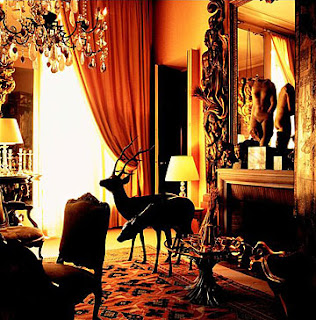 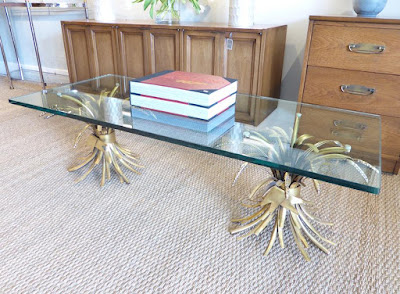 Made iconic by Coco Chanel (as seen in her Rue Cambon apartment above), the wheat sheaf table has remained a decorating classic.  While we have had many versions through the shop over the years, this is the first double-base coffee table.  Each base has a nicely toned gold finish, a substantial, well-crafted bundle of wheat and a thick ribbon tie.  The glass is 3/4" thick.  Italian, 54" l, 24" w., 16" h.  c. 1950's  SOLD

"Clubby" and comfortable mahogany chair with harp back by Kimbell Furniture.  It retains it's original rust plaid upholstery which is in excellent vintage condition.  American, c. 1960's  SOLD

Chrome and Brass Console and Mirror 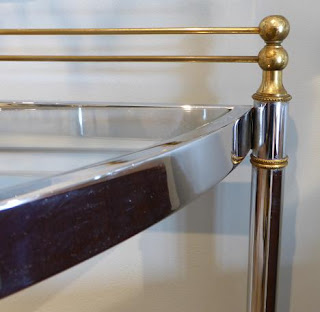 Most of the mirror and console pairs we come across are pretty traditional, so we were very happy to find this cool and contemporary set.  The mirror is quite large and has a brass-edged, polished chrome frame.  The two-tiered, chrome console has brass accents, including a brass gallery, and glass shelves.  Mirror, 48" h., 24.75" Console, 33" h., 44" l., 14" w.  American, c. 1970's  SOLD 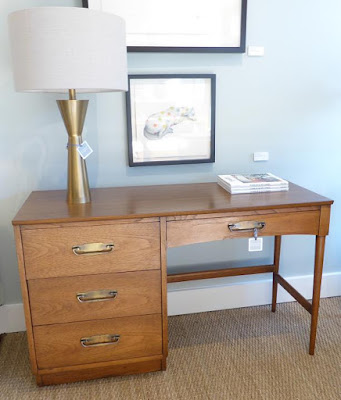 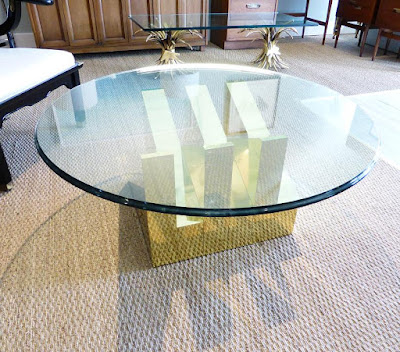 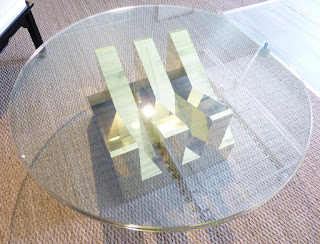 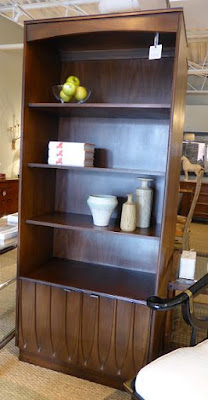 Similar in style to the Brasilia pieces we have had in the past, this pair of Brutalist bookcases are great looking and a great value.  Each case has three adjustable shelves and a pair of doors below which open to a small storage compartment.  71" h., 30" l., 15" w.  American, c. 1960's  SOLD 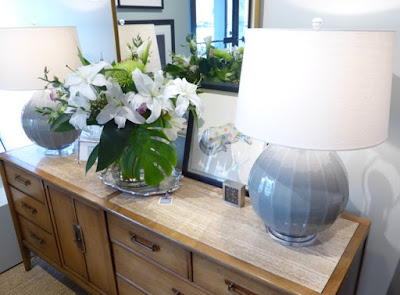 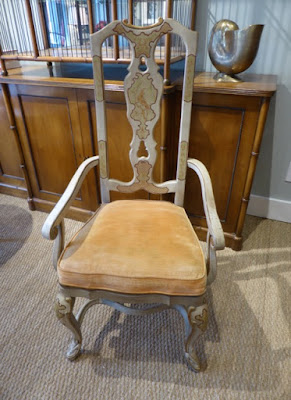 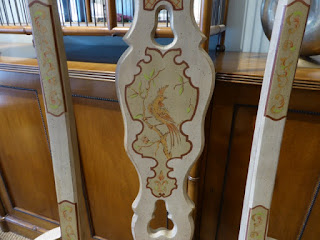 Set of six (2 arm and four side) fantastic Chinoiserie, Queen Anne style dining chairs with polychrome and gilt decorated backs and legs.  The original upholstered seat cushions show some wear and reupholstering at $60.00 per chair is available.  SOLD