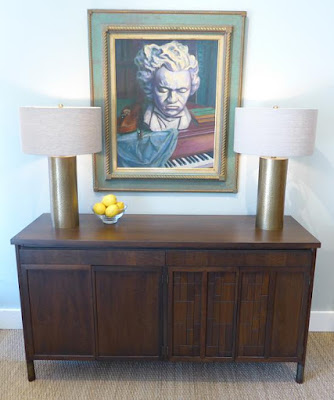 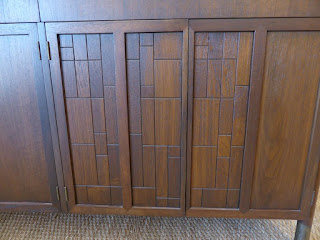 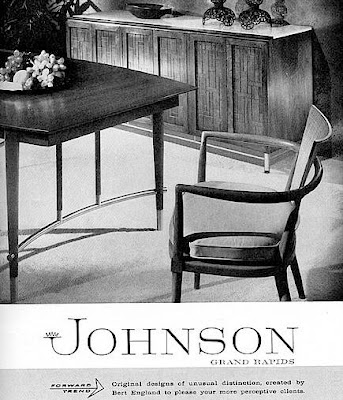 Exceptional quality and design on this handsome credenza designed by Bert England for the "Forward Trend" Collection by Johnson Furniture Company.  In one of the original ads from 1959,  the collection is described as "original designs of unusual distinction to please more perceptive clients".  This unusually distinctive piece has two sets of doors which open on the left to three drawers and on the right to an open compartment.  Above are two long shallow drawers.  The cylindrical legs feature patinated brass capped feet. 61"l., 20" d., 33" h.  American, c. 1960  SOLD 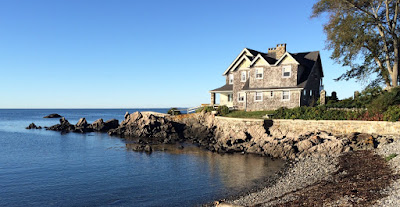 Time flies!  It seems like just yesterday I was a young 40 something embarking on the Michael Thomas adventure.  This week we are ringing in my new half century in Maine, and other parts New England.  While we are away, the shop will be closed from Tuesday through Friday, and we will resume normal business hours on Saturday, October 1st.  If you would like immediate assistance, please phone 416.407.1269 or email us at michael@michaelthomasantiques.com.  Thanks and have a great week! 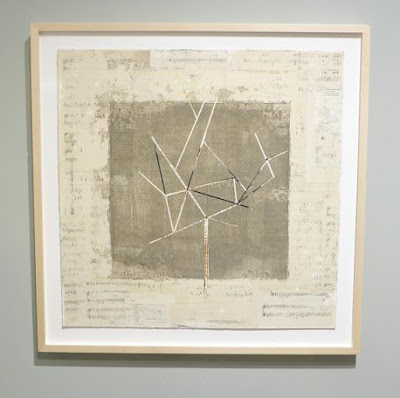 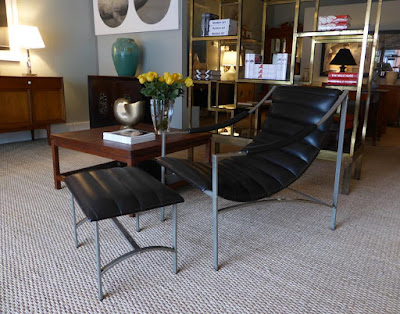 Not a follower?  Don't want the same Eames chair and ottoman that all your friends have?  How about this pair?!  The Otto Gerdau Company was established in 1872 in New York.  During the mid-twentieth century, they were known for their innovative designs and high quality.  This very stylish and comfortable chair and ottoman were made in Italy for Gerdau. Both pieces are padded and ribbed and the chrome frames have a satin finish.  Italian, c. 1960's  SOLD 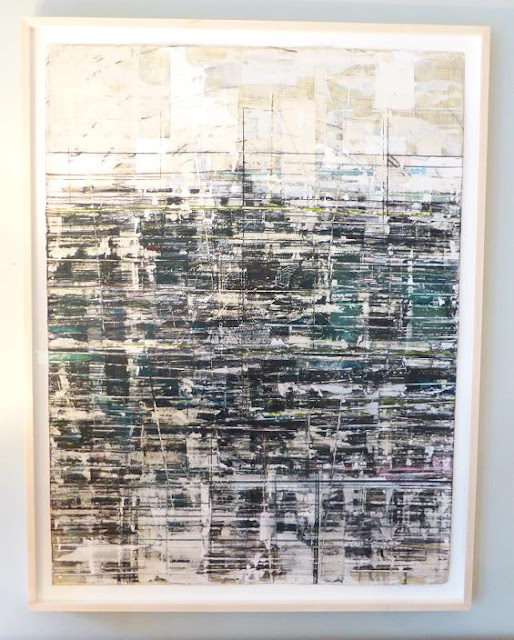 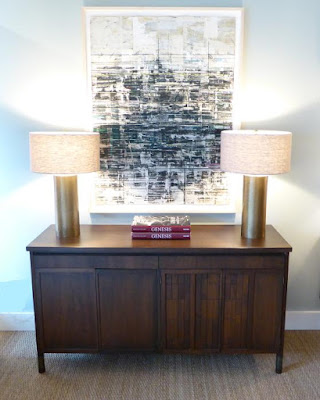 This exceptional piece by Britt is part of a newer series of works.  The "canvas" of this piece is composed of archivally preserved found documents.  The initial under drawings were inspired by images from the documents.  He then archivally layered a multitude of materials including pencil, ink, crayon and metal.  The result is a sensational, richly textured, work of art that has to be seen in person to be fully appreciated.  53" h., 41" w.  Canadian, c. 2016  SOLD 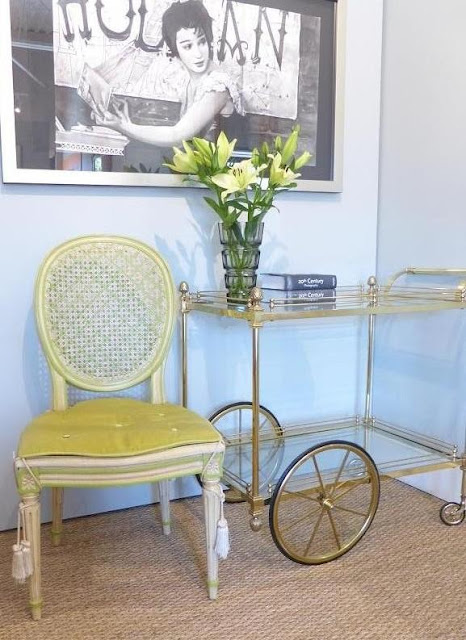 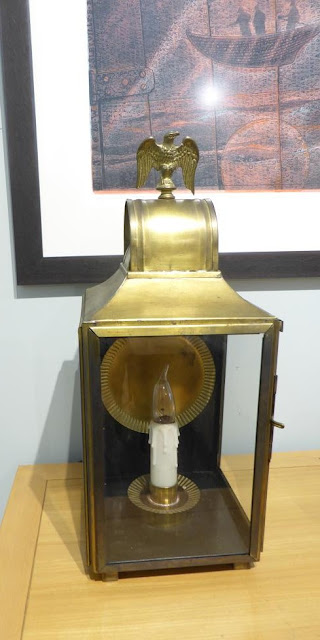 Large, handsome and very classic, this brass carriage lamp with an American Eagle finial, is electrified and may be used on a table or hung on a wall.  American, c. 1950's  SOLD 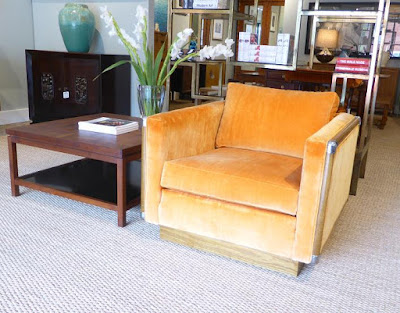 Fall color.  This cool MCM cube chair has its original pumpkin velvet upholstery which is in great vintage condition.  The sides are framed in pecan with chrome corners.  The square base is also pecan.  The original labels have been removed, so not sure of the designer or maker, but the quality is very good.  33" l., 34" d., 27" h.  American, c. 1970's  SOLD 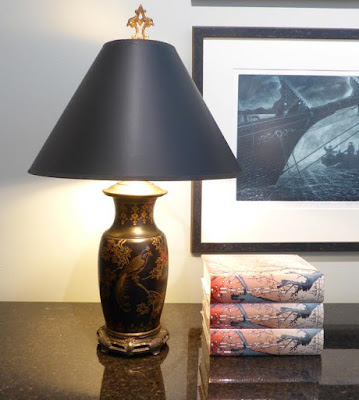 Continuing with our Mid-Century Trad. theme today is this classic tole lamp with ornate bronze base.  The body of the lamp has a black background and Asian influenced, gold foliate and bird decoration.  The newer black parchment shade has a gold foil lining.  24.5" h.  15" diam.  American, c. 1940's  SOLD 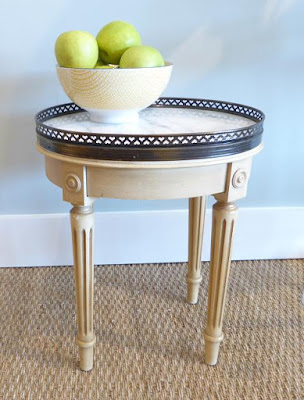 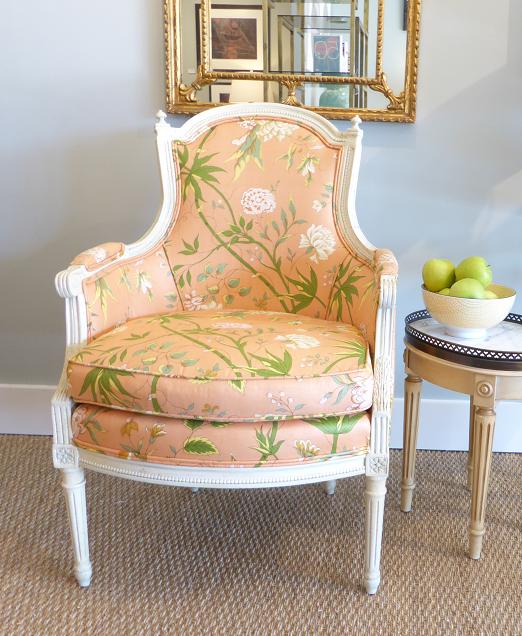 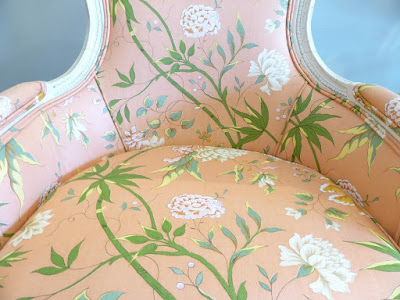 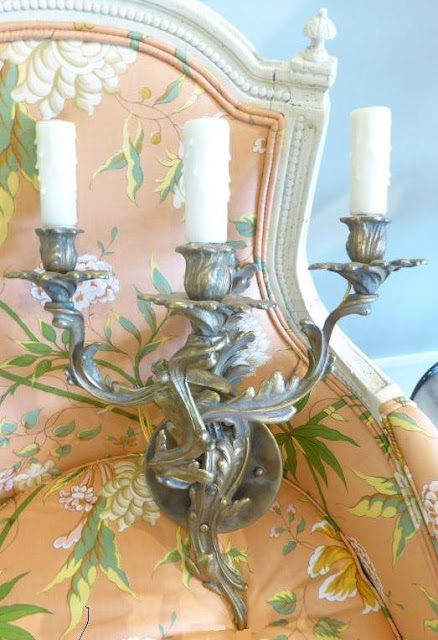 Email ThisBlogThis!Share to TwitterShare to FacebookShare to Pinterest
Labels: Sconces 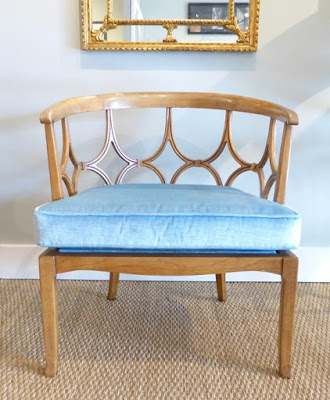 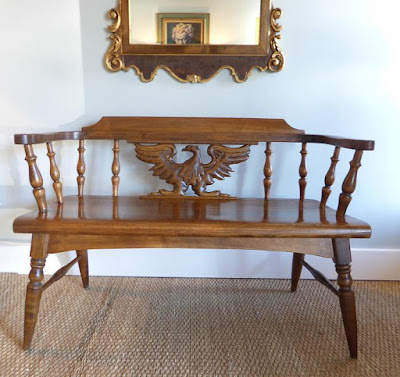 We're feeling "Bewitched" by Mid-Century American Colonial Revival today.  I think Samantha would approve.  This beautifully crafted bench was made by Cushman Furniture of Vermont.  Cushman was founded in Bennington VT in 1892 and originally made novelty items.  They invented the pencil and eraser combination as well as the first children's pencil box.  They started making fine furniture just before the turn of the century and really came into their own during the Arts and Crafts era.  In the early thirties, at the start of the Colonial Revival, they introduced a line called Colonial Creations.  It became extremely popular and they continued to produce it into the 1960's.  This handsome bench was part of that collection.  It would be a perfect addition to a cottage, country house or any home in need of a great looking bench for a entry way, hall way, bedroom, etc.  62" l., 21" d., 33" h.  American, c. 1950's  SOLD 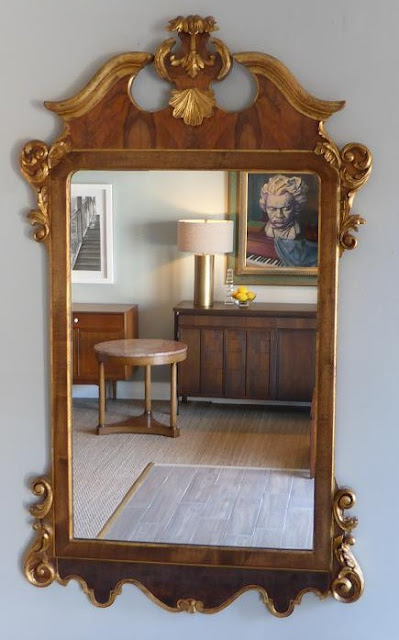 If you follow our blog, you know we are pretty fond of La Barge pieces.  This is one of  our favorite La Barge mirrors to date.  It is classic, elegant and Georgian in style with burl walnut inlay and gilt Acanthus and foliate decoration.  If you were mirror shopping on 1stdibs.com lately, you may have already seen it (at a slightly higher price).
https://www.1stdibs.com/furniture/mirrors/wall-mirrors/la-barge-italian-burl-gilt-georgian-style-mirror/id-f_3664072/
We purchased it with a couple of favorite clients in mind who love the classics.  You know who you are.....
49" h., 29" w.  Italian, c. 1960's  SOLD 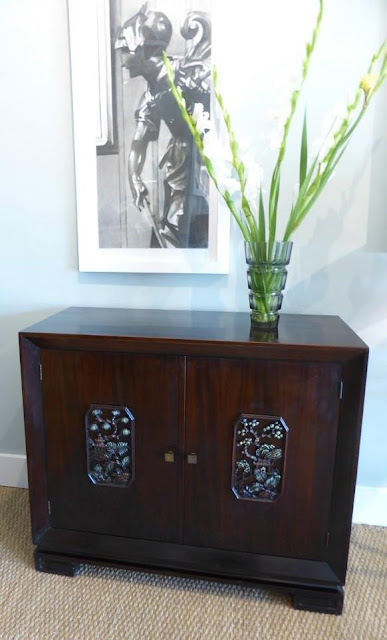 Mahogany, Chinoiserie cabinet in the style of James Mont.  This very stylish cabinet has two doors with carved and polychromed decoration which open to a storage compartment with one stationary shelf and a divided, felt lined drawer.  38" l., 17" d., 32" h.  American, c. 1950's  SOLD 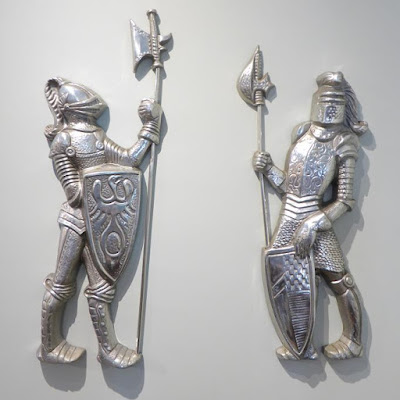 Knight in shining armour you ask?  How about a pair in aluminum?  These Hollywood Regency wall hangings are the perfect decorative accessory for your mid-century grotto.  They are quite large and very substantial.  Larger, 34" h., 11" w.  American, c. 1960's  SOLD

This week the Nickelodeon Network is filming the Pilot episode for a new television show on Dundurn Street.  The shop is open and completely accessible.  However, there are lots of trucks and vehicles associated with the show using the parking spots in front of the shop as well as on much of Dundurn.  As always, clients of Michael Thomas are invited to park in the senior's residence next door.  The Aberdeen Gardens parking lot is located just south of 318 Dundurn.  It is your first right past the shop when you are travelling south on Dundurn. 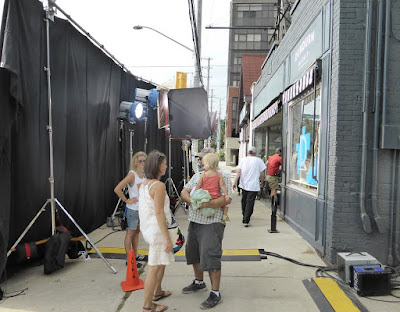 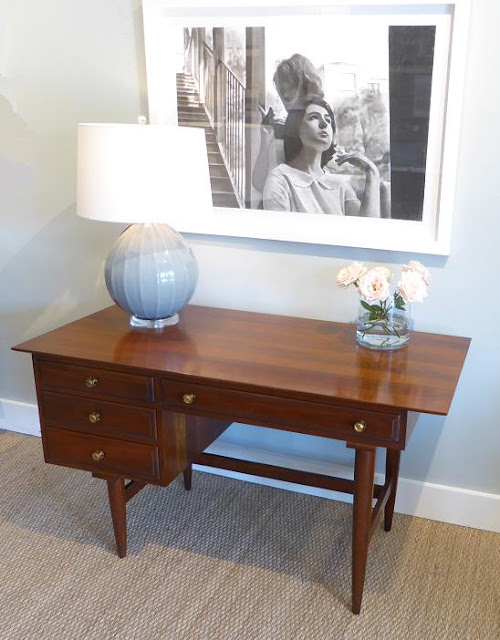 Beautifully crafted and striking a nice balance between classic and modern, this handsome desk by the Willett Furniture Company has a top composed of solid cherry planks, four drawers, elegantly tapered legs and is finished on all sides.  52" l., 25" w., 29.5" h. American, c. 1950's  SOLD 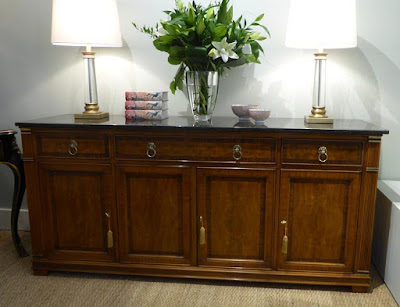 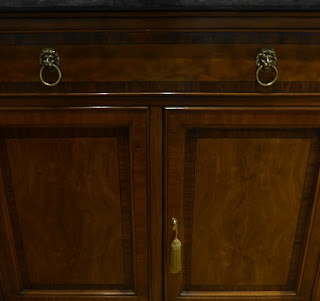 In keeping with the classics theme, we present this classic and sophisticated credenza by Heritage.  The piece has a black granite top, three drawers, one of which has a felt flatware insert, and four doors below.  The key-lock center doors open to a large compartment with a stationary shelf.  The key-lock side doors each open to a smaller compartment with one stationary shelf.  The credenza has rich, contrasting burl inlay, lion's head brass pulls and fluted pilasters with brass and ebonized decoration.  70" l., 20" d., 32" h.  American, c. 1960's  SOLD